Our research group is interested in modelling of elastic objects in fluid flow in solid channels (microfluidic devices). We have developed PyOIF module as a part of extensible open source package ESPResSo. The dynamics of the fluid is modeled by the lattice-Boltzmann method (LBM). The LBM is fast and easy parallelizable, which is necessary for simulations that contain large number of immersed objects. Immersed objects are represented using the immersed boundary method (IBM), in which the boundary of an object is represented by a triangular mesh containing points on the surface of the object. These points are moving in space under the influence of fluid-object interaction forces, as well as mechanic, elastic and magnetic forces. For each type of immersed object, different forces are applicable. Interaction between fluid and objects is done via dissipative forces between mesh points of the objects and fluid particles.

Short videos showing features of our model are available at Cell-in-fluid YouTube channel.

Model of elastic object is based on a triangular spring mesh on the object’s surface. In our model we consider the mesh points to be connected with springs that exert forces according to their prolongation. There are five types of elastic moduli in our model (stretching, bending, conservation of local and global area and conservation of global volume). Acting elastic forces are defined for each of them. More detailed description of bonds that connect the surface nodes of immersed object can be found in the articles below.

to magnitude of acting stretching force 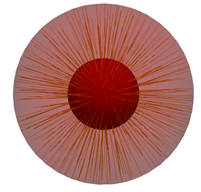 Since our model of elastic cell is versataile, we can use it to model different types of cells. Apart from RBC, most of the biological cells have nucleus that influences their elastic behaviour.  In order to model these cells we take 2 elastic spheres, one (representing the nucleus) more rigid then the other. Our current work focuses on mechanisms keeping the nucleus inside the cell membrane.

Thus far we work with two approaches. One uses repulsive forces which are dependent on the distance between the two spheres. Second one creates elastic bonds between the points on the spheres and keeps the nucleus in place by keeping the bond lengths at their relaxed length.